PETER DOOBININ
from The Skill of Living....
​

As dharma students we resolve to know this greater happiness.  This is why we develop the skillful qualities.

It’s our habit to look for happiness where everybody else is looking for it.  In many ways it’s easier to do what everybody else is doing; it’s easier to let the rapid current carry us off down the world’s river.  As I’m writing this book, one of the most popular, most desired forms of new technology is the flat-screen TV.  Everybody, it seems, is buying one of these gigantic televisions.  The prevailing message, dictated by the present-day culture, is that if you want to be happy you’ve got to get a flat-screen TV.  This is the way of the world, the path the world suggests for finding happiness.  Buy a new TV.  Be happy.

At times I find myself listening to this message.  Putting my eyes on one of these flat-screen televisions in a friend’s home or in the window of an appliance store, I find myself wondering if I should buy a new TV.  I find myself thinking that’s what I need.  That’s the solution.  If I buy a flat-screen TV, I’ll be happy.

There is a kind of happiness that we obtain from material objects, from the sense pleasures they deliver.  There is a “happiness” that we garner from pleasure, gain, status, praise.  But it’s a flawed happiness.  It’s a happiness that’s intrinsically stressful, painful.  The problem, as we’ve noted, is that it’s inconstant, unreliable.  It doesn’t last.  The flat-screen TV will provide only temporary happiness.  After a while, probably not a long while, it won’t offer the same jolt, it won’t supply the same happiness it did when it was first plugged in.  It probably won’t be long, in fact, before the technology becomes outdated, before another technology take its place as the favored instrument for TV watching.  As you’re reading this, it might have already happened.  The flat-screen TV might already be a dinosaur.  And we know what happens when that happens:  We become dissatisfied with what we have.  We want the new and improved TV.  We want the latest thing.

The fact is, if we look for happiness in things that can’t provide a reliable happiness, we’ll always suffer.  We’ll go through life perpetually dissatisfied.

It’s a happiness, it should be noted, that’s extraordinarily sublime, to the point where it can’t really be described.

On the night of his awakening, the Buddha was assailed by Mara.  When the Buddha didn’t succumb to the forces of desire and aversion, when he remained unmoved, Mara, in frustration, asked the Buddha what he thought he was doing, who did he think he was, looking for true happiness.  The Buddha, in response, simply touched his hand to the earth.  It’s a pose depicted in many statues.  The Buddha, essentially, was saying that he had a right to a true happiness.  It was his birthright.  Living on earth, as a human being, he had an opportunity to know a greater happiness.  And he was seizing it.

As a human being, you have a right to a greater happiness.  It’s up to you to seize the opportunity, to make the most of your life.

The effort you make in developing the qualities we’ve talked about in this book will bring you to the heart.  It will open your heart.  Like many rivers leading to the sea, you’ll move, in developing the skillful qualities, toward a province of vast heartfulness, lovingkindness, good will, compassion, joy, equanimity, acceptance, peace. 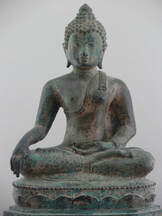